Homeschooler Produces Her Own Mystery Series 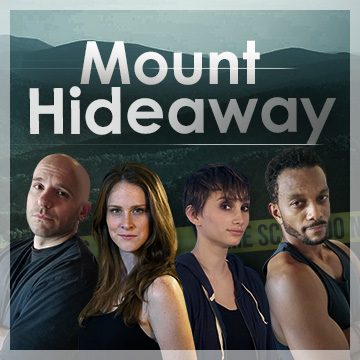 A homeschooled girl who grew up without cable TV may sound like an unlikely candidate to become a TV producer, but it’s that very background that led Mikayla Mulgrew to write and produce the show “Mount Hideaway”.

Mikayla comes from a large family that spends a lot of time together and is involved in sports and other activities. Her parents made the decision to homeschool Mikayla and her 4 brothers and sisters, and not to have cable TV in the home. They watch lots of movies and shows on DVD and via services like Netflix, but they’re choosy about what they watch as a family.

“I honestly loved being homeschooled. It may not be the right choice for everybody, but I feel like it prepared me to think outside the box. I grew up with a mindset of exploring and creating my own path, rather than just doing what everybody else was doing.
– Mikayla Leybovich, Producer, Mount Hideaway”

While in High School, Mikayla attended a faith-based program that trains and prepares actors and media professionals. That experience introduced her to the world of commercial media production. Her time there was very successful and she received multiple call-backs and scholarship offers.

When Mikayla graduated from High School, rather than going straight to college, she got a part-time job working for a real estate company and entered into a filmmaking “apprenticeship” with Brett Monk, an experienced video director and retired church-planting pastor. After working on several short film projects, and researching the current market trends, they decided to try producing a full-blown Murder Mystery TV Series.

“Mikayla has a natural talent for storytelling for sure.  But she also has an exceptional work ethic and a gift for thinking outside the box.  She’s not afraid to chart her own course and follow it. I’m convinced that her homeschool background contributed to that.”
– Brett Monk, Director, Mount Hideaway

They found that the marketplace for film and TV production is shifting rapidly away from Hollywood studio blockbusters shown in theaters, to smaller productions that are binge-watched from digital platforms like Netflix, Amazon Instant Video, and Video on Demand. Smaller studios in locations like Vancouver and Atlanta and creating movies and TV shows that appeal to niche audiences, who often find out about the shows via their friends on social media.

“Being homeschooled made me very family-centric. I spend a lot of time with my family, and it’s hard to believe for some people, but I actually really like my family. Some people are surprised to find that I spend dinner with my family once a week. We really enjoy each others company even if they can really get on my nerves sometimes. Being homeschooled made me focus on that more, as we obviously spent more time together than the kids going to school all day.
– Mikayla Leybovich, Producer, Mount Hideaway”

After going through several potential story ideas, Brett and Mikayla settled on the idea of Mount Hideaway, a “Hallmark-Style” murder-mystery based in a small rural town. The murder mystery genre is popular with the audience demographic that Mikayla wanted to connect to, females from 15 – 55 who enjoy family-friendly entertainment.

The pilot episode was self-funded, so the budget was tiny. The cast and crew were volunteers from the local acting and film community. Over 50 people pitched in and gave their time and talent to make the project happen. But now that the team has proven that they can create an enjoyable show and get it to market, they have several options for funding a full season with a more substantial budget.

At the same time, I love shows with action and strong plots.  I also love when an actress pulls off a strong, yet compassionate female character, and I look forward to putting that in our show as well.
– Mikayla Leybovich, Producer, Mount Hideaway”

The pilot episode was released under the title “Mount Hideaway”.  After airing for over one year and and tens of thousands of views on Amazon, the concept was re-worked and will now be airing as “Mount Hideaway Mysteries”.  The premiere of the new version is expected to be in Fall 2018.