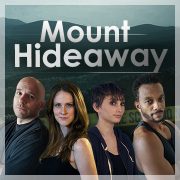 A beautiful young spy returns to her hometown and
solves mysteries with the help of her homeschooled childhood friends.

DESCRIPTION:
Mount Hideaway is a family-friendly murder mystery, with a similar tone to shows like “Murder She Wrote” or shows on the Hallmark Mysteries Channel. The show is G – PG rated for viewing by all audiences.

THE PLOT:
Bethany Shanholtz left her hometown and her boyfriend Jamie after her friend Rose (Jamie’s sister) was killed, while she and her teenage friends were investigating a local mystery. Bethany went on to college, where she was recruited by the government and became a spy. She took a leave of absence after a mission went bad and is now back home with her mom and her homeschooled younger sister on their family farm.
But murders start happening in the town as soon as Bethany returns and her government bosses want her to investigate them. They can’t give her official support, so she turns to her childhood friends and creates her own home-grown detective team. Together they solve mysteries and protect their town from danger

“Mount Hideaway” is a fictional area in or near Virginia’s Shenandoah Valley. It’s loosely based on towns like Winchester, Front Royal, Harrisonburg and Roanoke. It’s a town only about an hour away from the power and intrigue of Washington, DC. On one hand, it seems like an entirely different world than the Nation’s Capital, but the town has it’s own type of power and secrets.

THE PRODUCTION:
The Mount Hideaway Project is a COMMUNITY-BASED production. We are using actors, crew, and locations from within Virginia, showcasing the beauty and personality of our area, and the talented people who live here.

The show is being produced on a modest budget without the support of major studios or the Hollywood system. Our long-term goal is to establish a viable, sustainable film production environment in the Northern Virginia and Shenandoah Valley area by combining local talent with worldwide online distribution.

THE AUDIENCE:
Mount Hideaway Mysteries was created for “Female Mystery Fans of All Ages and the Men Who Love Them”. The show is designed to be fun, quirky, and as lighthearted as a murder mystery can be. There’s also romance and lots of cute animals. We wanted to create an exciting show with action and mystery, but without the graphic violence, profanity, and sexual situations that many viewers don’t enjoy, and that the Hollywood system seems to insist upon.

WHEN AND WHERE CAN I SEE THE SHOW?
The pilot episode, with a slightly different plot, aired on Amazon Prime for about a year while we collected reviews and data (which is what you do with a pilot episode). We then re-worked the concept and are releasing the new version of the show beginning in mid-2018. The Pilot has now been removed from Amazon in anticipation of the new season, but can still be purchased for viewing here on our website.
New episodes will be available on Amazon and other venues, as well as for sale/rental here on this website.

THE TEAM:
Mount Hideaway Mysteries is the creation of Brett Monk and Mikayla Leybovich, along with the support of an amazing cast, crew, friends and family.

Mikayla Mulgrew Leybovich – Producer
Mikayla Leybovich is the producer and lead actor in the Mount Hideaway series. She was homeschooled along with her four brothers and sisters. She started acting in 2014 with the AMTC program and has continued her acting studies with private coaching. While Mount Hideaway is her first nationally-distributed project as a lead actor and producer, she excels in keeping the sets organized and giving the show a vision for family-friendly entertainment with strong female characters.

Brett Monk – Director
Brett Monk has been a Radio, TV and Film professional for over 30 years. He is the director and “showrunner” for the Mount Hideaway Mysteries series. He has acted, directed, and crewed in hundreds of productions over the years. He also planted a non-denominational church where he served as Senior Pastor for 10 years. In addition to his film activities he co-owns a successful real estate business. He lives in Northern Virginia with his wife, daughter, and goldendoodle Jethro, who appears in the show.